Blackjack Terminology and What It Means

Blackjack, one of the world’s most popular casino games, is at its core a very simple game. The basics can be grasped in minutes and its relatively low house edge means even beginners can start winning straight away. If you’ve ever sat at a blackjack table before though, you’ll have realised that hidden beneath the game’s simplicity is a world of subtle rules and jargon. This glossary will help you gain a further understanding of the terminology used by dealers and experienced players around the world, and can be used as a point of reference for those playing blackjack online.

The best hand in blackjack is, unsurprisingly, ‘blackjack’. When twenty-one was first introduced in the United States, casinos offered increased odds on hands containing the ace of spades and a black jack. Today, any ace combined with any card that has a value of 10 is considered ‘blackjack’, and usually pays 3 to 2. Players dealt blackjack are immediately paid.

Hit and Stand are the two basic options that are available to players during a typical hand of blackjack. Hit, or “hit me” as is often called, informs the dealer that the player would like another card. The action is also sometimes called ‘draw’. Stand is exactly the opposite, and informs the dealer that a player is happy with his or her hand. Standing is also often referred to as sticking. The active game is over for a player that stands. 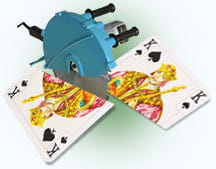 When players receive two cards of equal value in the first round the option to split becomes available. Splitting means separating the pair of cards into two hands, receiving an extra card for each. The player is responsible for matching the bet of the original hand on the second hand. Splitting is especially popular when players receive two aces as the cards combined don’t yield a great score, but when separated and paired with 10s they can be very valuable. 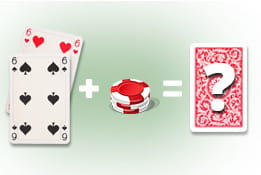 Doubling down is a high-risk, high-reward move that players use when their position looks particularly promising. When choosing to double down, the player increases the initial bet by 100%, and in return receives one more card only. The move is popular when holding a hand valued at 11, where hitting a 10 is the intended outcome. Players may also opt to double down whilst holding 9 or 10 if the dealer is showing a low card.

There are times when luck is just not on your side. Players dealt a terrible hand can cut their losses and surrender before the dealer has played. Giving up on a hand early might seem a little pessimistic, but players can salvage half of their original bet by surrendering. The option to surrender is only available in specific versions of the game. For a selection of blackjack surrender games, check out my Winner Casino review.

When both dealer and player have hands of equal value, a push or tie is called. This is the same as a draw. The player will have their original stake refunded, and essentially the hand is null and void. The number of cards used to create the hand is irrelevant, as are suits and individual card values. Be careful, in some variations of blackjack, such as double exposure, the house benefits in the event of a push with the player losing all ties. 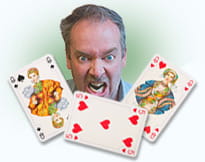 Going bust means exactly what it sounds like. Kaput, it’s game over. Any blackjack hand with a total card value of more than 21 is considered bust. When going bust, the player automatically loses their stake, regardless of what subsequently happens with the dealer’s hand. Evaluating the risk of going bust on any given hit is indeed the most important skill in the game of blackjack – so choose your moves carefully! Remember, any hand of 12 or more has the potential to bust in a single card.

Even money is a more generic gambling term used to describe odds of 1:1. A bet of £10 at even money will return £20, £10 for the win plus your original stake. A bet of £20 returns £40, and so on. Winning hands, excluding blackjack, are paid at evens in casinos and online. The same odds apply to bets on red or black on a roulette table.

Players sat in the seat directly to the dealer’s left are said to be sat on first base. The term, which comes from baseball, describes the player who will receive dealt cards first. This player may also be referred to as ‘first baseman’. Players sat on first base will also act first during the game.

The opposite of first base. Players sat immediately to the dealer’s right are said to be on last base. Last baseman is last to act. There are some minor tactical advantages to being in either first or last base, but most are related to blackjack card-counting techniques.

A hole card in gambling terms is a card dealt face down and is therefore of unknown value. In poker, for example, players receive all cards in the hole to protect their hands. In blackjack, the dealer receives one card face up, and one hole card. The card is not revealed until all punters have finished playing.

When the dealer receives an ace in the hole, an optional side bet known as ‘insurance’ becomes available to players – you will be prompted to either take or decline the side bet. The bet works like any other insurance policy. Players put up a sum of cash to guarantee a pay-out in case the dealer is holding blackjack – in other words, a mechanism to curb the risk of a major loss. The odds on insurance vary, but 3 to 2 is common among several blackjack variants. If the dealer does not have blackjack, players lose their insurance bets but they can continue to play their original hands. 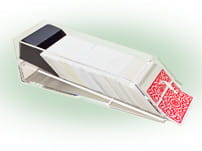 In land-based casinos the wooden or plastic box used to hold the playing cards at a card table is known as the shoe. Casino shoes usually hold between six and eight decks of shuffled cards and are designed to allow dealers to distribute cards quickly. Online, however, there is no shoe. Cards are shuffled after every hand in online blackjack, except for live streaming games of course.

In blackjack, stiff refers to any hand with bust potential namely between 12 and 16. A stiff hand is a combination of two cards and is usually used in reference to a player’s hand. A stiff card, is often used to describe when the dealer is showing a 2 to 6 – given that the most likely value for the hole card is 10. Receiving a stiff hand is bad news for a blackjack player, whereas a stiff card for the dealer is excellent for players.