The story of the classic game roulette dates back more than 400 years and unsurprisingly, during this time stories and facts surrounding the game have developed. Although the rules and strategies have been communicated since the its inception, the game in its current guise isn’t far from the original as far as history can tell. A few minor refinements over time made all the difference, maintaining roulette’s popularity among contemporary gamblers. The remainder of this article delves into the finer points of how the game has advanced over the years for only when you understand the history behind the game can you appreciate the real charm of playing. 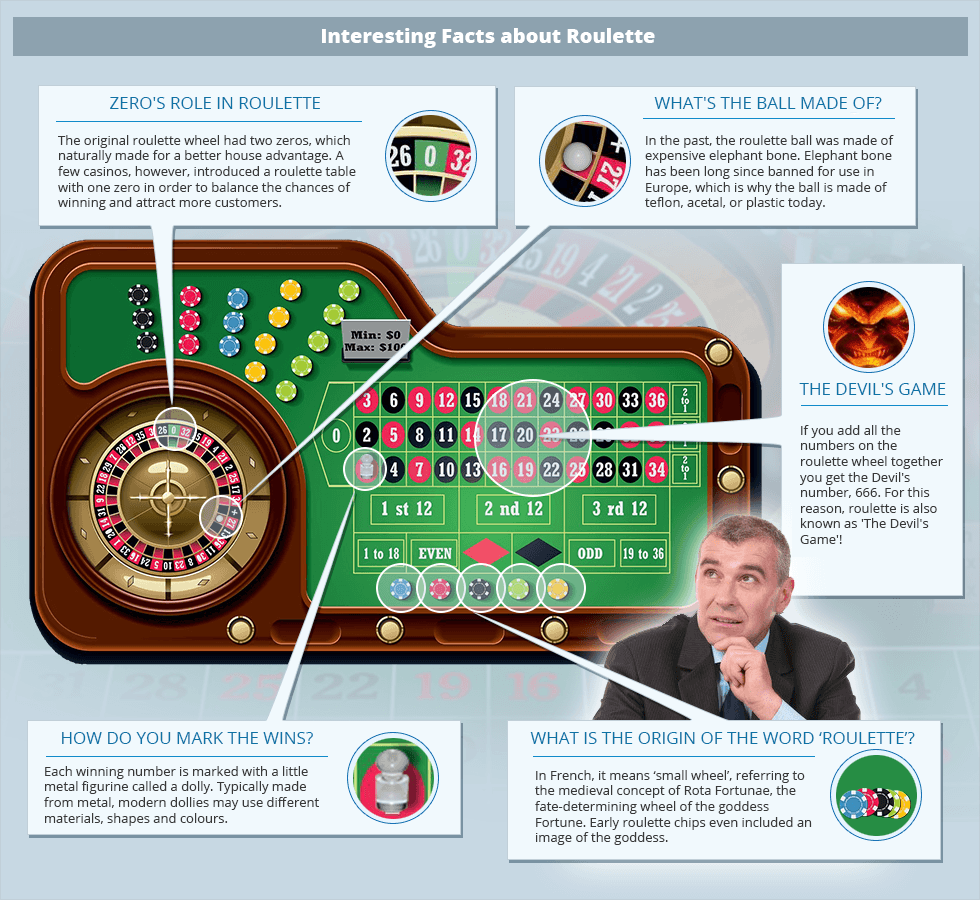 The History of Roulette: The Name and The Game

There’s more to roulette than a simple game of chance, both the name and game itself have native origins. Readers with a decent command of the French language won’t be surprised to hear that the term roulette is a French word meaning ‘little wheel’. The game gained great popularity in France during the eighteenth century and the infamous French naval commander Napoleon Bonaparte is documented as being particularly keen on playing roulette around the this time.

It was Napoleon who in 1806 again allowed the gambling in the playhouses of the Parisian palace. The game we know and love soon hit British shores and reached an enormous degree of recognition. It continues to enjoy favour from casinos goers all over the world and in online casinos.

In the Beginning There Were Two Zeros

There have been some transgressions from the game in its original format. Since it was initially developed for play between two friends, and not for commercial purposes, there was not a single zero to be found (since there were no house odds to cater for). Once it was introduced to casinos and playhouses the ante was upped, so that the casino could take in some money. This was of course achieved with the introduction of two zeros. Since the zeros don’t belong to any of the odds, they reduced the players once 50/50 chances.

This gave the house more of an advantage, and casinos began dropping the double zero to stand out from each other. This of course meant the house advantage sank and simple chances became closer to fifty/ fifty once more. The new concept went down so well, casinos offering a wheel with two zeros become snubbed and had no choice but to offer the single zero format. This single zero format has prevailed in Europe, in American on the other hand, the two zero setup is typical.

There are a few different strategies for roulette. Aside from the highly documented Martingale and Parole betting systems, there’s also flat betting to get your head around. Simply put, flat betting is a straightforward betting technique where you play the same bet size game after game or spin after spin. The profit to profit or indeed loss to loss ratio stays the same each turn which may seem a bit boring depending on your favoured style of play. If staying prudent is your thing, this style is enormously capital-friendly!

It goes without saying that no betting system is risk proof, and progressive strategies can lead to some major losses in the long run. This is clearer to understand by looking at a basic probability calculation. We’ll assume with each ‘turn’ of roulette, a euro is bet. Since there are 37 slots in the wheel of which 18 lead to profit, the chance for profit is 48.65%, and loss, 51.35% (since 48.65 percent accounts for black and the remaining 2.7 percent for zero).

If we assume that 100,000 rounds of the same €1 bet are played on red, taking the odds into account, €48,650 will be won and €51,350 will be lost. An overall loss of €2,700 may seem steep, however considering a €100,000 overall spend, this is a relatively small concession. To try out these strategies for real, i’d advise heading to the roulette main page, which includes a guide to the best online roulette casinos.

How Is the Winning Outcome Marked?

From casino to casino there are different ways to mark a win. Take the French and European roulette game for example. It’s common for the dealer the call out the winning number whilst pointing to said number with the rake, (the Rateau). This same rake is used to collect all lost bets back to the dealer as well as pushing chips back to the winning players. Conversely, in the American version, you’re more likely to see a metal figure on the winning field, this little figure has the nickname Dolly.

Roulette is roulette and doesn’t go by any other name in a casino, however nicknames on the street are common, for example Americans often refer to it as ‘The Devils Game”. The nickname in the US would suggest the folk over the continent are a more suspicious bunch than in the UK, however, withholding judgment here is a brief explanation behind this thought process. The origins of the name is disappointingly mundane, simply add up the numbers of the entire roulette wheel and bingo, one arrives at 666, the so called number of the devil. Due to this vague connection between the two spheres, some experts suggest roulette has a religious origin, and was invented by priests in the far east.

What’s the Material of the Roulette Ball?

Originally, the roulette ball consisted of the extremely valuable, and most controversial material, ivory. Ivory is obtained from the tusks of an elephant. The contemporary balls are mostly made up of plastics and occasionally ceramics, since the latter make more noise they’re saved for special occasions. It’s completely banned to use fabric to construct them for obvious reasons.

The man, the maverick, Ashley Revell is infamous among roulette fans and professional gamblers alike. There’s plenty written about him online and in editorials, and lots suggest he’s a professional player, but this couldn’t be further from the truth. Simply put, Mr Revell, born in 1972, was just a little eccentric. As the story goes, this menace to casinos sold his life’s possessions, including his clothes, ending up with a tidy sum of $135,300. With these funds, he headed to the Plaza Hotel and Casino in Las Vegas, Nevada and placed the entire lot on red. The ball fell on number 7 red doubling his savings. Giving $600 to the croupier, he said thank you and was on his way. Spectators anticipated another righteous bet but low and behold, he left the casino and founded his own poker company. The event was even filmed and recorded by the broadcasters Sky One, check out the video below.

All or Nothing: The Craziest Roulette Bet of All Time