How to Play Mega Moolah Online: Check out a Free Demo or Spin for Real Money

This Microgaming slot is one of the most popular online gambling games not only for UK players but on around the globe. Much of the fascination with Mega Moolah comes not from any particularly exciting gameplay elements, but from the enormous prize pools that it often pays out. We’re talking tens of millions of pounds, in progressive jackpots that hold the Guinness World Record for the biggest ever jackpot slots wins – and consistently breaks its own records. You can play this progressive jackpot slot at almost every online casino, but we recommend you play Mega Moolah online at Casumo. 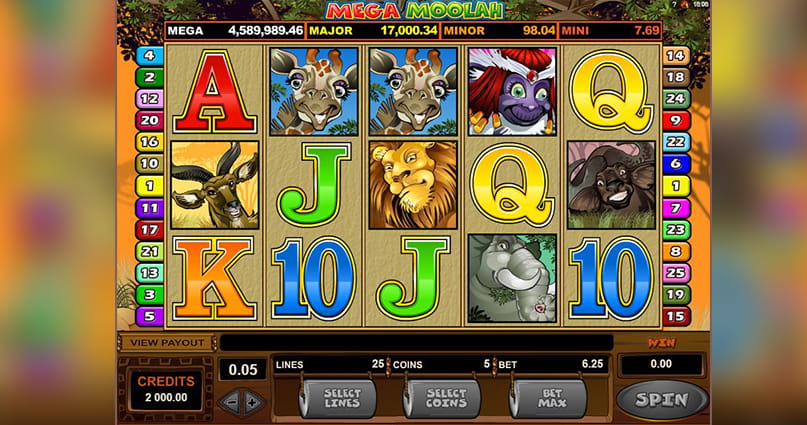 The Best Alternatives to Mega Moolah

There are countless other games from Microgaming that you could play if you decide not to play Mega Moolah online. The software provider has a huge catalogue of titles in all sorts of themes, many with progressive jackpots that give this one a run for its money. Don’t feel the need to restrict your gameplay just to this developer’s titles though, there are also dozens of rival firms that are all out there creating their own portfolios of games featuring unique characters and high-quality soundtracks. If you can think of any theme, we pretty much guarantee there is a slot based on it. A handful of recommended slots suggestions are highlighted here, if you’re not sure how to dive into the plethora of games. 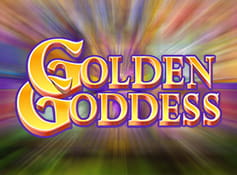 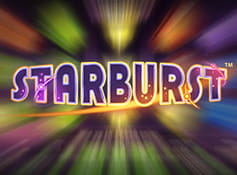 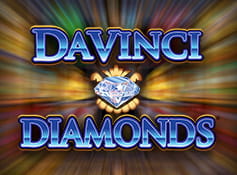 Before you play Mega Moolah for real money, we recommend you first get acquainted with the statistics, facts, symbols and figures about the game. The only trouble with the progressive jackpots that are interlinked into the slot is that you can’t really play Mega Moolah for free. This is because the jackpot accumulates with the bets that are placed on every spin of the reels, so any spins without a bet placed would confuse the system. However, we’d still recommend you have a look at the demo we’ve included above, where you can at least get a look at how the reels are laid out and move in the five-reel, three-row grid, and see the jackpots ticking up in value every second.

The main character of the Mega Moolah online slot is the lion, who gazes down on the players from his place in the paytable as the highest paying symbol. He also acts as the Wild symbol, and if three of him are found sprinkled across the grid then it will activate 15 free spins, giving him reason to roar in delight. Alongside him are characters you probably wouldn’t see next to a lion in the real savannah, what with the whole food chain thing. However, you’ll see a big, blue-eyed zebra, a cheeky antelope and a shy elephant, as well as a buffalo and a clumsy giraffe gracing the reels. The soundscape also plays into the theme, with the chirping of birds and whistling of cicadas giving a wild vibe.

The Biggest Progressive Jackpot – How Does It Work?

Though you can’t exactly play Mega Moolah for free, you can still get a handle on the rules before diving in. As with every slot game, there’s not a lot of strategy or input that you can control in order to change the outcome of the spin. When you play Mega Moolah for real money, you can choose which of the paylines you want to bet on and devise a strategy of your own on how you want to wager. However, none of this will have any effect on winning one of the four progressive jackpots. Instead, the jackpots are triggered completely randomly – you don’t even need to have won the spin to take home a Mega Moolah jackpot, but the rules do state that the higher the wager, the more likely you are to win. 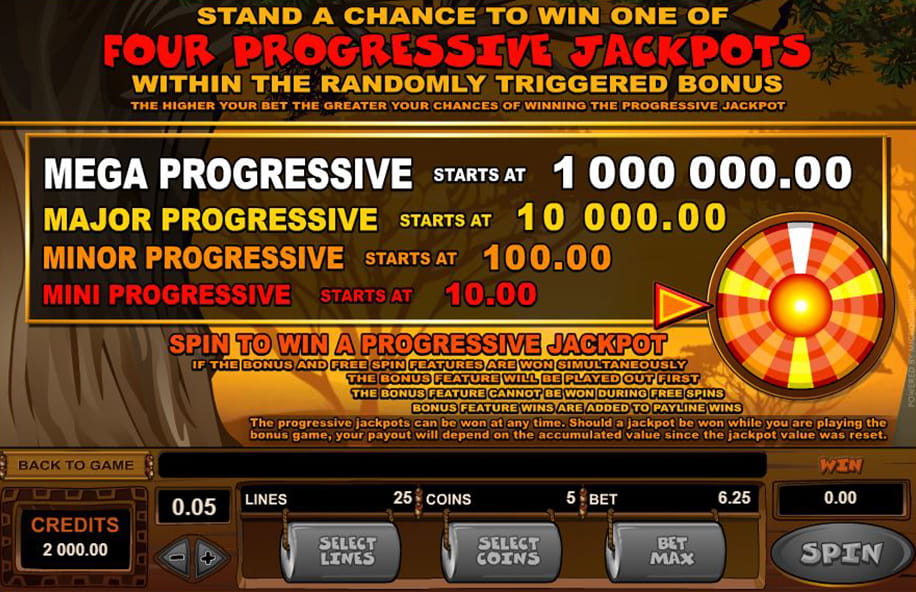 Winning a progressive jackpot is pure luck, as the prizes are triggered completely randomly. When a jackpot goes off, your wagered amount will factor in to whether you receive the Mini, Minor, Major or Mega prize.

One thing to note about the Mega Moolah online slot before you begin to play is that it has a rather low return to player (RTP) percentage of only 88.12%. The average in the industry is between 92 – 96%, so this is very much on the bottom end here. This means that it calculates to payout less of a player’s wagered money back to them over an extended period of time. The main reason for this is that it pays out much less often in order to be able to justify the enormous jackpots. Overall, a standard player stands to spend more and win less on this slot than on many of the other slot options out there.

The massive popularity of Mega Moolah has made sure that you will never hear the end of Mega Moolah spin-offs. Or so it seems. Up to date, there are three other variants of this game: Mega Moolah Isis, Mega Moolah 5 Reel Drive, and Mega Moolah Summertime. Check them out in the slideshow below.

Microgaming truly seems to have followed the ‘Why change a winning team’ approach – the 5×3 layout is consistent across all four Mega Moolah titles, and all four games feature the coveted 4-level progressive jackpot of the franchise. Similarly, you will never encounter more than 25 paylines. In fact, Mega Moolah Summertime goes fantastically retro with a maximum of 9 paylines. The different facades of the reels is the only big thing you will notice between these variants, while Mega Moolah Isis boasts the highest number of special features: wilds, multiplier, gamble feature, free spins, bonus game, AND a jackpot!

Where to Play Mega Moolah for Real Money

As it is one of the most popular slots in the world, it’s more surprising when you find a casino that doesn’t include Mega Moolah in its portfolio. So, when it comes to choosing the best Mega Moolah casino, you can afford to be picky about other aspects to the casino. I this sense, we recommend having a look at the welcome bonus on offer, the quality of the customer support and the payment methods that are available. Our pick of the month is highlighted in the table below, but you can also check out our list of the best online casinos if you’d like to consider other options.

Mega Moolah
Play with up to £300 Bonus
for New Players at Casumo
Play Now!